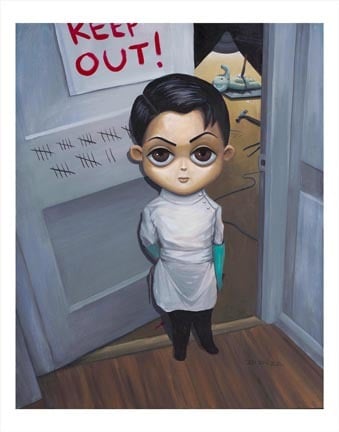 One of my favorite films is the 1931 Universal version of Frankenstein. Colin Clive was the name of the actor who portrayed Dr. Henry Frankenstein in that film as well as his reprised role in the Bride of Frankenstein. (You may remember his line "She's alive! Alive I tell you! - also seen in another of my favorites, Weird Science.) My little Clive is a mischievous and diabolical scientist in the making. We've stumbled upon him as his seemingly innocent demeanor poorly masks the "tests" he's conducting. We can only hope that the rodent behind his back met his fate with less suffering than the elephant in his room. The tick marks on the door might symbolize the number of successful or failed experiments but they also number my age when I painted this... and the age Colin Clive was when he died.